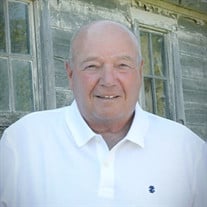 On a beautiful spring day, the kind a true farmer loves, William “Bill” Nathan Kiewiet passed away on April 28, 2020 at his home in Mason City. Bill was born on July 25, 1948 to Vernon and Daisy (Abbott) Kiewiet. He spent his entire life in the agricultural field. After 25 years of farming, God had a different plan for Bill. Never one to stray too far from the fields, Bill spent the next 25 years as a crop adjuster. Those who knew Bill well, knew he loved gardening, and his garden loved him back producing some of the finest crops around. He also enjoyed 4-wheeling, golfing, and fishing. Bill attended Northern State College in Aberdeen, SD and found another passion – football. His work ethic and determination paid off as his team went undefeated in 1969. Fifty years later, Bill and his teammates were inducted into the Northern State University Hall of Fame. It was those same teammates that were responsible for Bill meeting the love of life. They picked the girl least likely to go out with Bill and bet him he couldn’t persuade her to go on a date. Not only did he convince Sharon Lehecka to go on one date, he proposed three months later and they would have been married 49 years on June 5, 2020. As they enjoyed their life in rural Iowa, Bill and Sharon welcomed three children – Justin, Gretchen and Nate and found a whole new level of enjoyment when each of his seven grandchildren were born. Bill is best described in the words of his daughter, “My sweet dad lost his battle with cancer yesterday. We are all completely heartbroken, but we are relieved he is finally at peace. The boys and I were lucky to have such a wonderful dad and our kids really hit the jackpot because they got the best grandpa. He taught us so many life lessons about hard work and perseverance even in the tough times. He was our biggest cheerleader, never giving unsolicited advice, but always making sure we knew he was there. If you knew him, you loved him. He was always willing to lend a helping hand or just sit and have a Bud Light with you. He will be deeply missed by all who knew him, but especially by my mom, my brothers and I (and Jody and Maggie) and most of all, by the grandkids. After all, their grandpa was the best hugger in the whole world.” He will be greatly missed by his wife, Sharon, and children Justin Kiewiet, Gretchen (Jody) Wynia, Nate (Maggie) Kiewiet, and his grandchildren Mason Kiewiet, Blake and Makenna Wynia, Grace, Evelyn, Clara and Will Kiewiet.; his siblings Carolyn Ruggles, Carlyle (Mary Lee), Betty Sifuentes and his in-laws Jo (Bob) Jeitz, Jan (Joe) Barraza, Nancy Schuring, John (Debbie) Lehecka, Jill (Jack) Aadland and Mary (Dave) Nelson. Ready to welcome him to his eternal home are Vernon and Daisy Kiewiet and in-laws, Jack and Pat Lehecka and many close friends. A quote from a Texas rancher summed up Bill’s life perfectly. “Not a moment of life is wasted on a farm. Others may have been more places, but they haven’t outlived me”. Due to state and federal guidance on gatherings due to the COVID-19 pandemic, a funeral Mass will be held at a future date at Sacred Heart Catholic Church, Manly.

The family of William N. "Bill" Kiewiet created this Life Tributes page to make it easy to share your memories.

On a beautiful spring day, the kind a true farmer loves, William...

Send flowers to the Kiewiet family.