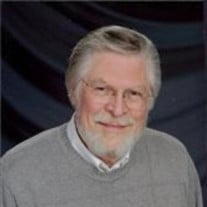 Norman L. “Norm” Luker, 76, of Mason City, passed away Thursday, February 27, 2020, at MercyOne North Iowa in Mason City. A Celebration of Life service will be held at 10:30 am on Tuesday, March 3, 2020 at Bethlehem Lutheran Church, 419 N. Delaware Avenue, Mason City, with the Rev. Mark Lavrenz officiating. Burial will follow in Memorial Park Cemetery, Mason City. Visitation with public viewing will be held Monday evening, March 2, 2020 from 5 pm until 7 pm at Hogan Bremer Moore Colonial Chapel, 126 3rd St NE, Mason City and will resume one hour prior to Norm’s service at the church on Tuesday. Norman Lee Luker was born on January 24, 1944 to Arnold and Ethel (Stinehart) Luker in Carthage, MO where his father was serving in the Army. Norm was a lifelong member of Bethlehem Lutheran Church in Mason City, where he was baptized, confirmed, and later married. He grew up in Mason City and graduated from Mason City High School in 1962. He then attended Mason City Junior College for two years and then graduated from Hamilton Business College in 1966. In 1968 Norm was united in marriage to Donna Snyder and to this union one daughter, Lorri, was born. Years later they divorced and he married Twila Palmer in 1988, bringing her daughter, Deanna, and son, Scott, into the family. Norm started a band, the RAVONS, when he was 15 years old, along with friends, Russ Rippen, Doug McLaughlin, Gary Godferson, and Doug Klindt. They first played at the Mason City Mohawk Follies and shortly after they won the Bill Riley Regional Talent Contest which sent them to the state contest. From there they played for weddings, proms, private parties, in ballrooms including the Surf, and opened for a number of well-known artists at the time. Norm worked in the music business his whole life working for Carleton Stewart Music, Boyer Music, and Kephart Music as store manager and road representative – along with playing in the band with new members, Gary Fuller, Denny Fuller, and Bob Willits, and cherished their friendship together. He had many great experiences and made a lot of friends calling on band and vocal directors throughout North Iowa while he was a road rep. Norm was also a talented woodworker, remodeling his home, many furniture projects, and one of a kind projects/toys for his grandchildren. Left to cherish his memory include his wife, Twila; children, Lorri (Steve) Caster, Clive, IA, Deanna (Duane) Loeschen, Mason City, and Scott (Elisabeth) Palmer, Carrollton, TX; grandchildren, Brittany (Logan) Hanson, Nate and Jake Caster, Drake and Derek Loeschen, and Sophia and Erik Palmer; sisters in law, Audrey Ames, and Tanya (LaVern) Dahl; as well as several cousins, nieces, nephews and extended family. Norm is preceded in death by parents; brother, Leland Ames; and granddaughter, Zimry Loeschen.

The family of Norman L. "Norm" Luker created this Life Tributes page to make it easy to share your memories.

Send flowers to the Luker family.