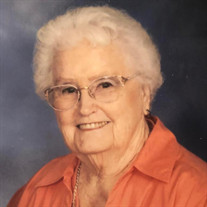 Lelia Margaret (Schwartz) Hansen Bates, 89, of Mason City, passed into Heaven on Monday, April 13, 2020 at MercyOne North Iowa – Hospice Inpatient Unit. Lelia was born February 16, 1931 to Theodore and Margaret (Cassens) Schwartz, in Cook County, South Dakota. She was the seventh of nine children. In 1934 the family moved to a farm near Clear Lake, Iowa. A year later they moved to the Plymouth area where she lived until her marriage. She graduated from Plymouth High School in 1948. During her early working career, she worked at Montgomery Wards and United Dairy. She was united in marriage to Alvin C. Hansen on August 14, 1949 at Radio Chapel in Mason City. Lelia was a true partner to Alvin in their livestock and crop operation. Lelia took great pride in her farrowing operation which she managed for 33 years. Alvin and Lelia farmed for 50 years in Owen Township, Cerro Gordo County, until Alvin’s passing in November 1999. In 2002 Lelia left the farm and moved to Mason City. She filled her time with volunteering, traveling, quilting, and serving on the board of the Mason City Senior Center. Her love of music played an important role in her life. She enjoyed singing as well as playing accordion, piano, and organ. She was a longtime member of the First Covenant Church where she served on many boards and committees. She loved her church family. She married Gordon M. Bates on April 14, 2005. Together, they enjoyed dancing, playing cards, gathering with friends and family, and traveling. For many years Gordon and Leila sang and played at area care centers. They loved to JAM with friends at their winter home in Mission, Texas. Lelia became an avid fisherwoman and spent many summers on the lakes of Minnesota. She was a very accomplished seamstress. With a large family to clothe, her sewing machine was always working. Over the years her sewing interests grew to include making beautiful gowns and coats, upholstery, and creating with pigskin leather. A highlight for her was to be able to make several western-style sports coats for country artist, Charlie Daniels. Lelia’s love for her Lord and dedication to her family was the driving force of her life. Survivors include her husband, Gordon; her children, Vikki (Randy) Fischer, Thornton, Rosemary (Dan) Barr, Ames, Dixie (Dr. Robert) Polle, Sioux City, James (Christine Friedrich), Mason City, and Dawn (Scott Borwig) Ethofer, Polk City; grandchildren, Abby Anderson, Dr. Adam (Amy) Ostendorf, Wanda and Courtney Barr, Danielle (Eric) Woestman, John and Dr. Mark Polle, Crystal (John) Richards, Colton and Cade Hansen, and Grace Ethofer; great grandchildren, Delaney, Avery, and Colin Anderson, Alexandra Wilkey, Harper Anderson, Iris and Runa Woestman, and Jack and James Richards; as well as her sister, Judith (Russell) Borchardt, Clear Lake. Also included are Gordon’s children, Todd (Sherry) Bates, and Julia (Sterling) Bierbrodt and their families. Lelia is preceded in death by her husband, Alvin; an infant daughter; her parents; and siblings and their spouses, Evelyn (Reuben) Bartusek, Vera (Vernon) Johnson, Eileen (LaVern) Rognes, Russell (Marguarite) Schwartz, Loretta (Willis) Koenigsburg, June Bradley, and Mavis (Clarence) Deardeuff. Due to state and federal guidance on gatherings due to the COVID-19 pandemic, a private service will be held for Lelia’s immediate family and a public Celebration of Life will be held at a future date. Condolences and memorials may be sent to Leila’s family in care of Hogan Bremer Moore Colonial Chapel, 126 3rd St NE, Mason City, or left at ColonialChapels.com.

The family of Lelia M Hansen Bates created this Life Tributes page to make it easy to share your memories.